The Annual General Meeting (AGM) of Prolight Diagnostics AB (publ) took place on Friday 20 May 2022. The AGM was conducted by way of postal voting, without the physical presence of shareholders. Full information regarding the decisions of the AGM is available on the companys website, www.prolightdiagnostics.se.

Resolution regarding the adoption of the income statement and the balance sheet, as well as discharge from liability

The AGM resolved to adopt the income statement and the balance sheet for the Company for the previous financial year. The board of directors and the managing director were discharged from liability for the same period.

The AGM resolved that no dividend be paid for the previous financial year, and that the profit will be carried forward.

The AGM resolved to re-elect the registered accounting firm, Mazars AB, as the companys auditor until the end of the next AGM. The authorized auditor, Jesper Ahlkvist, will serve as the auditor in charge. Fees to the auditor are paid against approved invoices.

Authorization of the Board of Directors to resolve on issue of shares, warrants and/or convertible instruments

The AGM resolved, in accordance with the boards proposal, to authorize the board to, on one or several occasions during the period until the next AGM, issue new shares, warrants, and/or convertibles to a maximum of 35 percent of the Companys share capital at the time of the AGM 2022. The board of directors is authorized to issue new shares, warrants, and/or convertibles with deviation from the shareholders preferential rights and/or provisions for contribution in kind, set-off or other conditions. The complete proposal containing additional conditions is included in the notification of the AGM.

The following documents can be retrieved from beQuoted
Prolight Notice from AGM 2022.pdf

Prolight Diagnostics, together with the subsidiary Psyros Diagnostics and technology partners, develops innovative, flexible, patient-centered test systems, Point Of Care Testing (POCT), which is based on patented technology. POC tests are performed outside the traditional hospital laboratory with small mobile instruments in, for example, health centers, nursing homes, emergency rooms and intensive care units, which enables testing close to the patient and with fast test results. This technology will mean that care at an early stage of diagnosis can distinguish the patients who need care quickly from the patients who, for example, do not have a heart attack. The global sales value in the POCT area amounted to USD 29.1 billion in 2020 and is growing strongly.

The companys shares are traded under the short name PRLD on the marketplace NGM Nordic SME. G&W Fondkommission is the mentor, telephone: 08-503 000 50. 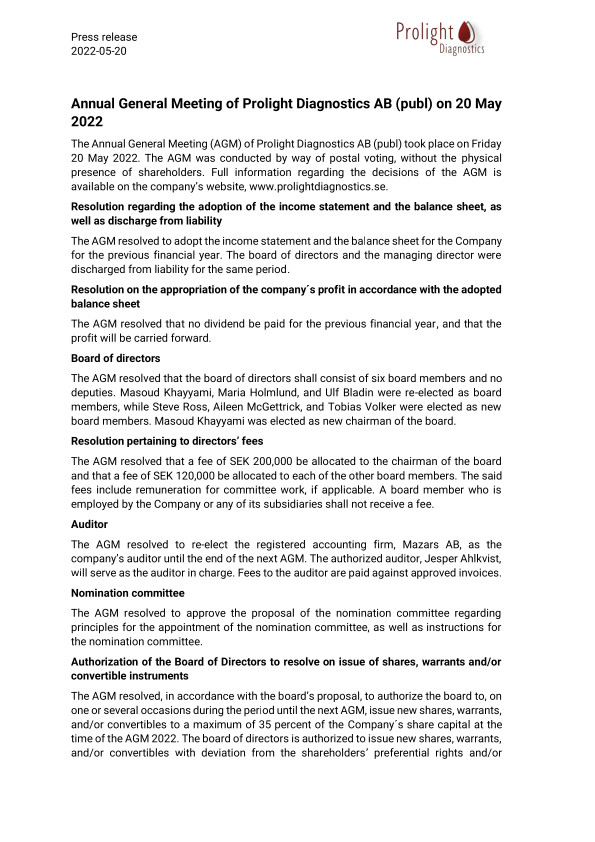